I’m sitting next to Darth Vader. Not as an extra in Star Wars, but as someone trying to meditate and tune out the overpowering noise of my neighbour’s breath. Every few minutes she takes an audible inhale followed by a long throaty exhale, accompanied now and again by a low moan. I wonder what is going on in her head in a bid to get away from the battering ram of my own thoughts. It is amazing the little things that start to consume your mind when you are not allowed to speak for a week.

And so it begins…the final week of silence. Just me, myself and I, at the culmination of the last month of my yoga teacher training in Bali. We have moved two hours north, away from the crazy tourist mecca of Ubud that was home for the last four weeks. The only route in to the retreat is via a nauseatingly winding, mountainous road that snakes down to a coast bursting with palm trees, bougainvillea and frangipani. I could not imagine a nicer setting for deep self-inquiry. Feeling an Eat, Pray, Love moment of tree-hugging anticipation, I start to look forward to the seven days ahead.

Then we receive the schedule. Meditation, meditation and more meditation. We are due on our mats by 5.30am every morning, with the last sit ending at 9pm. It is a long day with just my mind and I for company…no talking, eye-contact, touching, reading or writing. Nothing had prepared me for just how difficult it would be to just SIT. After hours parked on my strategically placed cushions, my buttocks are numb, my hips are on fire and my back is crying out…and that is just the physical. The mental is a whole other ball game…

Our teacher had told us to look out for the arising of vasanas – those negative tendencies that lurk deep within. Sit with only yourself for company for hours on end and you can guarantee they will start to rear their ugly heads! Mine came in the form of anger and impatience directed for about four days at my neighbour’s overpowering breath. I spent hours meditating in annoyance on the ins and outs of her respiratory system, that come day four I had broken out in a sweat.

When we were finally allowed to speak for 10 minutes on day five to one of our teachers, I went in tears with my ‘predicament.’ Forming the words, I realised how trivial my worries were! Had I been in an ashram in India, my teacher told me, chances are someone would be farting or belching beside me. If it was not that, then there would be something else to distract me on the path to inner stillness!

On the last day, I broke through a barrier. I gave in to the barrage of thoughts and as I finally sat solidly in my seat, I felt a taste of that inner peace. There were no lights, no nice colours, just a feeling of stillness. The thoughts still came and went, but I was no longer caught up in the stories. When we finally broke our seven days of silence, everyone shed a little tear. I had never imagined that not talking for a week could feel so good. The same old negative thought patterns had swirled like broken records so much over the past week, that by day seven I had learned to see them for what they were…boring stories that only I was listening to.

Back in Dubai, I sit down to meditate for the first time since my 5 weeks of training. I realise the real test begins…applying all that I have learned in the setting of the ‘real world.’ Tuning into the breath, I try hard to tune out the sound of the passing traffic and the beep of school buses reversing… Bring back Darth Vader; it was so much easier then!

There will always be something to distract us in the quest for inner stillness. Some of us will undoubtedly have a bigger task than others, but I remain convinced looking for it every day is important. Even if it means taking five minutes at the bottom of the garden while Dad keeps a reign on the kids. Or logging off facebook to tap into the breath instead of someone else’s photo album. That little piece of stillness is always inside of us. Some days, it might just take a little extra digging.

BaliYoga
By Cheryl Parsons on September 14, 2011 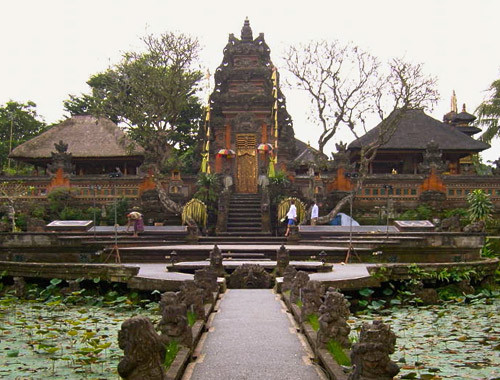