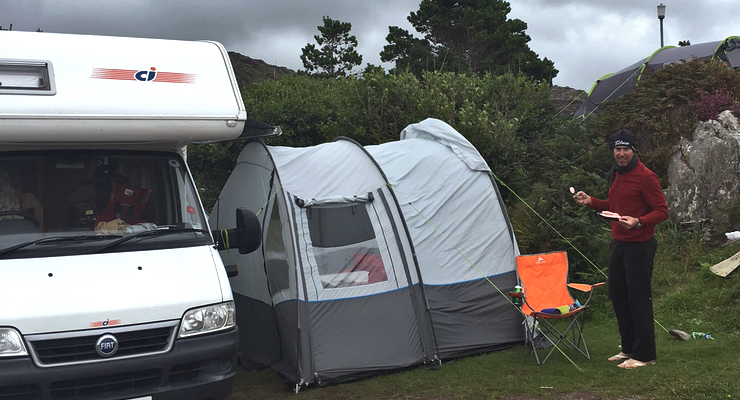 “What are you going to say to the lady at the hire place when you drop the campervan back?” I ask the husband half way through our five hour commute back to civilisation.

“That was SO brilliant, thanks EVER so much!” he replies with fake joviality. We both laugh, by now fully able to admit: We’re not cut out for this campervanning malarkey.

Let’s rewind the clock shall we?

It’s the usual Irish summer day – p*$sing it down – when the husband sweeps into my mum’s driveway in our mobile ‘abode’ for the week. A 5 berth motorhome, complete with, as advertised – all the ‘mod cons.’ The children are as excited as I am as we pack the van with everything we’ll need for the week, my bikini included. Then having bashed my head on the overhanging bunk bed no less than five times (something I’ll do at least 50 times throughout the week), we gleefully strap the kids in and get on our merry way. 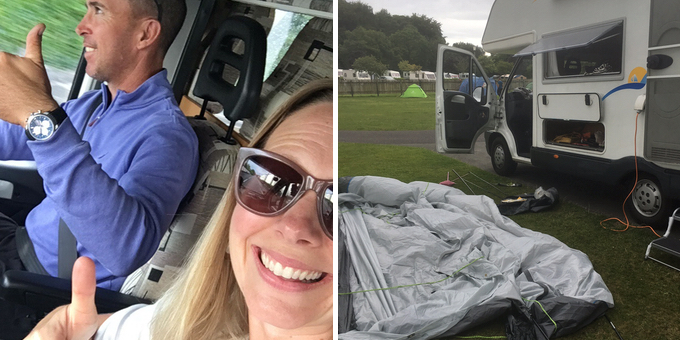 The holiday gets off to an idyllic start – beautiful scenery en route, a quick break for the kids in a park to stretch the legs, a nice crisp glass of sauvignon blanc over dinner. We make great headway into our planned tour of Ireland, pushing nearly 4.5 hours towards Kildare, before we stop in a designated motorhome ‘safe spot’ for the night: a pub car park. Once we’ve cursed and tackled constructing the ‘easy to fit in five minutes’ bed guard for Henry, we’re ready to tuck ourselves in for the night, lulled by the sound of passing cars on the nearby road.

Day two sees us drive south-westwards towards Kilarney, and as we pass other campervans on the road, they wave or flash their lights as if we’re all part of some special campervanning fraternity. It’s all a bit of a novelty, and despite the fact that it’s noticeably more baltic than we had thought it would be, we’re all in a positive frame of mind.

Until that is…the awning fiasco. 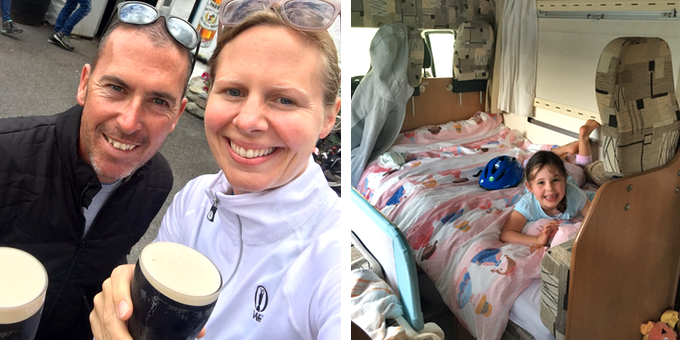 “Did you not ask the woman how to put this bl&*dy thing up?” I ask the husband through gritted teeth. “Don’t you start!! She said it was simple,” he says tersely. The whole thing is in a pile on the damp grass beside the campervan, with no instructions in sight. Not even a You Tube video can be found on google. We’ve no fecking idea what we’re doing. We finally admit defeat and ask a man who has just spent 40 minutes putting up his own tent to help us put up ours. A short while later, I’m sipping a well earned G and T, as I tackle the chore of turning all the seats into beds for the night.

Now the husband, who is pushing over six foot, is definitely not cut out for the beds in a campervan. After having squeezed ourselves into the overhead bunk the night before (which is by far the biggest ‘double’), we switch it up so that I’m sleeping with Molly, and he’s knees bent in the bed opposite Henry. It’s not ideal, but we embrace it as all part of the camping culture. Sure, what’s a bit of back pain these days anyway? 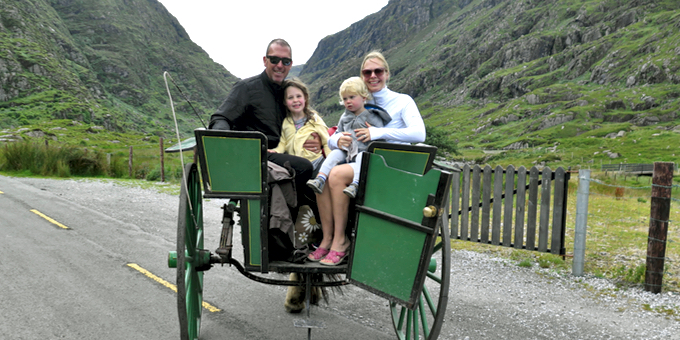 Day three brings a little sunshine so we head off to Kilarney for a horse and cart tour through the Gap of Dunloe. It is special little excursions like this that make the stresses of campervan life a little more worthwhile. The kids are delighted as we set off a trot, and the scenery is nothing short of breathtaking. After following up with Guinness and ice-cream we are all in agreement that it has been a fabulous afternoon.

Back at the van, the kids have a meltdown, the rain has started again, and I manage to bang my head no less than five times in the process of making up the beds.

On Day four, we pack up and take down the infamous awning, while the husband tackles the job of cleaning the chemical toilet. Moving swiftly on from that part…

We head out on the Ring of Kerry, a circle of absolutely stunning scenery – rugged mountains, vast lakes, acres and acres of untouched countryside dotted with sheep, cows and horses. While the kids sleep through most of the journey, we stop at various points to take snaps, agreeing that this is exactly why we wanted to do this whole campervan thing in the first place. 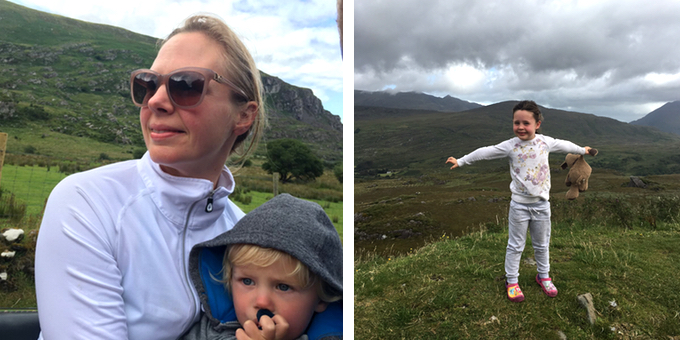 We arrive at a beautiful family run campsite called Waves Crest in Caherdaniel along the Ring of Kerry, set in an elevated position overlooking little beaches and coves. After taking just 30 minutes to erect the awning together with no threat of divorce ensuing, we proudly survey our handiwork, and I even manage to squeeze in a short yoga practice.

It’s quite idyllic until the rain hits again and it starts to feel almost arctic like. As the husband huddles over our disposal bbq wearing his woolly hat and fleece, we both agree that the site is a little ‘exposed.’

Night four is perhaps the straw that breaks the campervan’s back. I wake up to it rocking from side to side. The wind is howling, the rain is lashing, and we’re a touch worried that we might roll off a ledge into the Atlantic. “The handbreak is on, isn’t it?” I whisper to the husband at 3am, while the kids snore through the whole storm, oblivious. 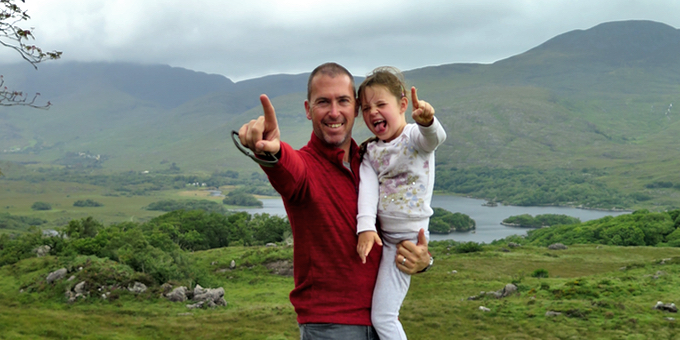 We wake up on Day five pretty bedraggled. By now the campervan has that faint odour of wet dog due to the continuous inclement weather, and we’re both feeling a little like gypsies. My bikini remains balled up at the bottom of a bag, while my summer dresses hang sadly in the cupboard. The kids however are having a whale of a time despite the fact that the weather it’s definitely more December than the start of August.

“So, how do you feel about staying in a holiday cottage?” says the husband out of the blue. He has already been in touch with his friend to accept their kind offer of accommodation. Needless to say we hot-foot it nearly 5 hours drive to Clifden, Galway, ironically with the sun shining for the first time the whole way. We arrive in Connemara, throw open the doors and realise we couldn’t be happier. To have a washing machine. A bed over 5 foot. A shower without a token. A toilet that doesn’t require (ugh) emptying. A wood burning stove. Proper glasses instead of plastic tumblers.

Yes, we’ll unashamedly admit. We’re not cut out for this campervanning malarkey. 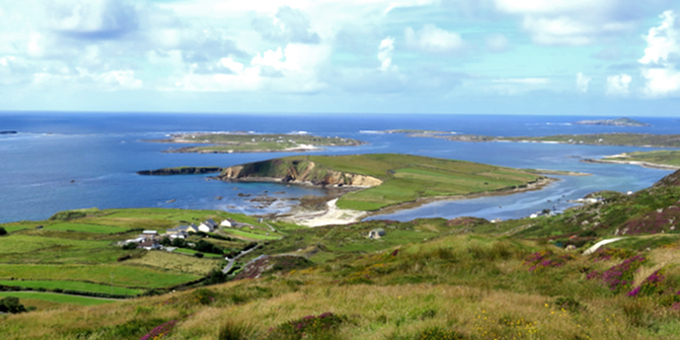 The husband heads off to get supplies for dinner, and despite an irate call: “I’ve not got the height clearance to park this fecking thing in Supervalu!”, a pint of Guinness and a G and T later, and we’re feeling a good bit more settled.

We spend three wonderful days in Connemara with the campervan forlornly parked in the driveway. Molly, who is obsessed with horses, enjoys a magical trek at the local horse-riding estate. The husband gets in nine holes of the nearby golf club with Molly in tow – quality time for daddy and daughter. (Her highlight was joyriding the golf buggy). I enjoy a leisurely browse of the town while Henry naps in his pushchair. We drive the spectacular Sky Road just outside Clifden, a sweeping stretch of road that winds 150 metres above sea level. There is truly no landscape quite like rural Ireland – especially on a sunny day. 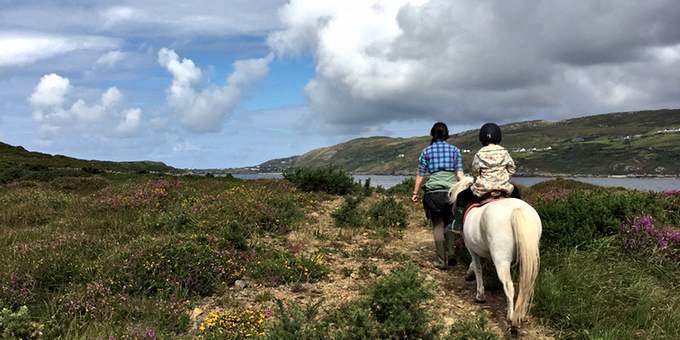 Despite the usual day to day family tensions and stresses, we are a heck of a lot happier when we’re sheltered under bricks and mortar. The husband and I agree that even if the weather had been on our side, we wouldn’t be rushing to book another motorhome. I can definitely see the appeal – we would never have seen as much of Ireland without it, and the kids loved the novelty of it. But truth be told, if you looked around the caravan parks, there were very few campervans with a 2 and 5 year old in tow! Managing young children at the best of times can be a challenge, but doing it in something that you can barely swing a cat in is, well – quite taxing!

As we set off on a five hour marathon drive back to my mother and father in law’s, we get the usual salutes from fellow campervanners. “Do you not feel part of the brotherhood?” I ask the husband as we stop to refuel. I bash my head yet again on the overhead bunk before he has time to answer. We have a good laugh about it all, reflecting on what has been a crazy week full of highs and lows. There’s no doubt, it is definitely an amazing way to experience the world, and had the weather been on our side, it may have been a different story.

But for now, we quietly nod in agreement. We’ll probably book a hotel next time!

May the road rise to meet you,
may the wind be ever at your back.
May the sun shine warm upon your face,
and the rains fall soft upon your fields.
And until we meet again,
may God hold you in the palm of his hand. 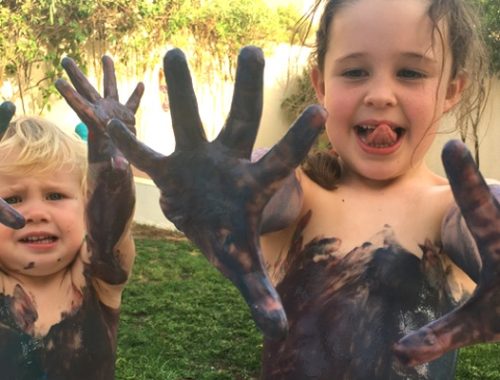