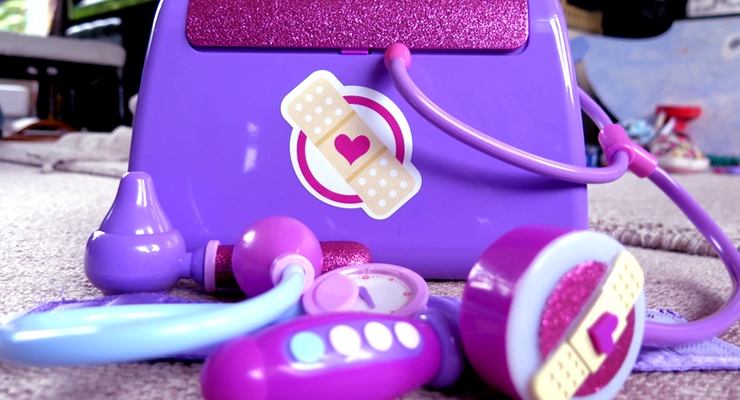 “It’s time for your check up,” says Molly brandishing her Doc Mc Stuffin doctor’s kit. “Yes Mummy. It’s a crocodile,” she concludes as she listens intently, waving her ‘stetta-scoop’ over my basketball belly. “Now. We make it POP out. Here’s your medicine,” she says gleefully, shoving the sparkly pink dispenser in my mouth.

Ah, if only it were that easy! With less than two weeks to go until my so called D Day (14th June), the reality that what goes in must come out is dawning big time. Maybe this one will just pop out. Maybe the bean will be a little smaller than the 10 pound 8 ouncer Molly was. Maybe my labour will be half what it was. Maybe my body will bounce back a little more easily. 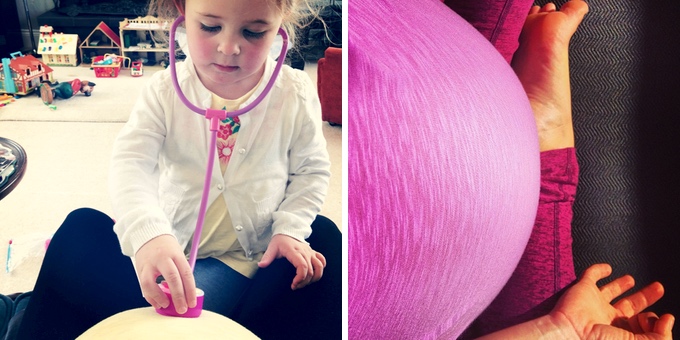 Maybe. Well, just maybe. For the truth is, there is only one thing I can know for sure, and that’s the fact that this is one future event over which I have no control – a thought that is both scary and exhilarating. For now, I’m quietly telling the bean to hold on until at least 10th June so the husband can make it back from Dubai to be by my side!

Meanwhile my body is already moving full speed ahead in preparation for what is to come. Sleep has become even more elusive, thanks to baby break-dancing in the wee hours and a toilet stop that needs to take place at least every two hours. Not to mention being woken up from time to time by a toddler complaining of a bad dream. Oh and the braxton hicks. Those pretend contractions that cause your belly to bunch up and harden every now and again. Kind of like being hooked up to a slender tone machine and receiving sporadic little muscle contractions, except this time it is my uterus that is getting toned and not my six-pack.

Yes, physically there is a lot going on. Mentally – that’s another story. The other day I have to confess to having the mother of all meltdowns. Shouting, tears, irrational thoughts, all sparked by something really simple – a tone of voice that I took the wrong way, a comment that I deemed a provoking one. While my rational mind told me not react, my pregnant brain shouted: “Push the destruct button now and don’t worry about who is in the firing line!” 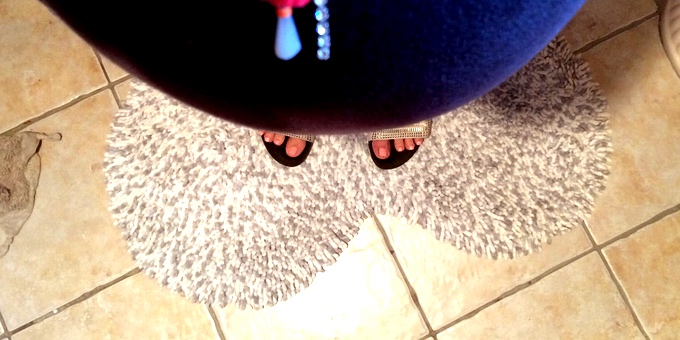 Sigh. There was no sign of my yogic composure in those moments! “Try to tap into your inner strength,” my Dad reminded me. (Note to others: comments like that = not helpful when dealing with a hugely hormonal and heavily pregnant woman). But the beauty of the people we love is that they’re prepared to take the rough with the smooth, the good times with the bad. They’re here to pick you up when you fall down, and thankfully, I can safely say now, that the storm has passed!

With D Day fast approaching, I’ll admit I am finding it harder to stay focussed and grounded in the here and now. On certain days, I quietly think: “Please don’t go into labour today, it’s really not a good time! (Note: ideal time would be after I’ve had 10 hours of uninterrupted sleep, watched a few episodes of Game of Thrones, had a relaxing swim, practiced some light yoga, meditated, made sure I’d navigated the task of shaving my legs and was generally feeling well rested and raring to go.)

So in these coming days I’m trying to remember that obsessing and worrying about the future, whether it is over giving birth or some other major event, only leaves us feeling overwhelmed and drained. Accepting that what will be will be is a huge part of this process. Learning to roll with the punches, ride the storms and pick ourselves back up with a smile is what it is all about, and sometimes a simple swim or a quiet time out is all it takes to short circuit the pattern. To remind ourselves that we do have that strength within to deal with whatever lies ahead. One present step at a time. 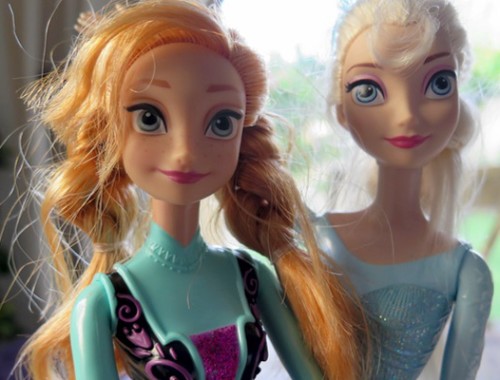 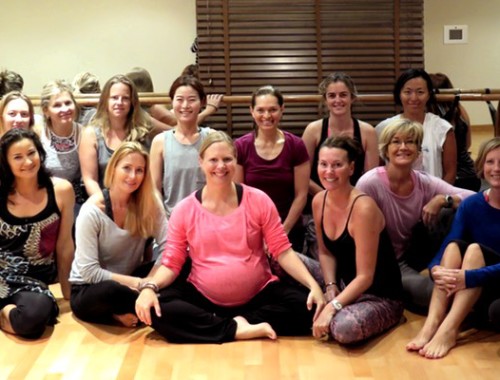